Well, this weekend was a busy one! Two shows over two days with lots of people to talk to and lots of things to look at and do. Sunday evening I looked (and felt) like I had been to some sort of festival... 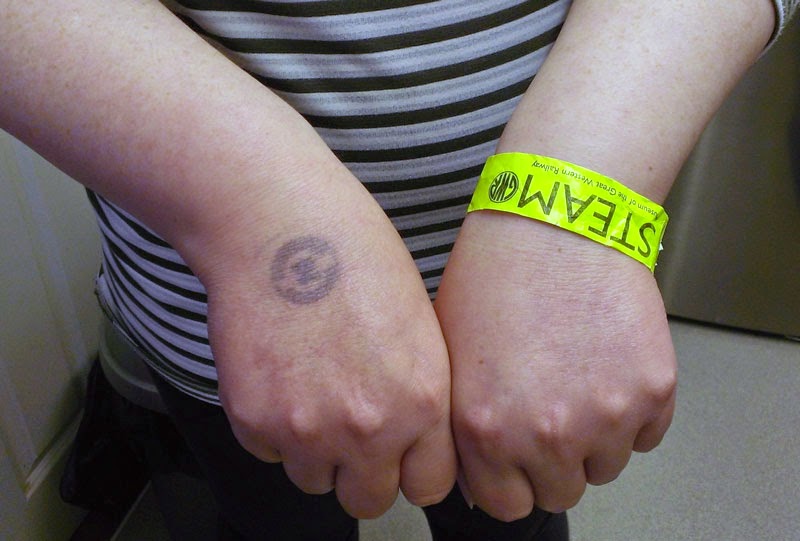 Saturday was spent at the Swindon 'Steam' festival at the Swindon Steam museum. Its the 3rd year I have done a demo there and it never fails to impress me on the venue, content, and general atmosphere of the place. I mean, how many model railway shows are there each year where the stands and layouts are mixed in with the Great Westerns finest steam locomotives, its such a mecca for people like myself.

I managed to get some modelling done too in the form of putting together my recently CNC milled chassis side frames for the PECO collets I have. It was fairly straight forward as the bits were already ready from the previous attempt so all I needed to do was swap them over to the new frames. I am sure to post about them sometime in the future. I was a little saddened by the performance of some of my engines which had the opportunity to run on Mick S ever excellent Wansbeck Road layout. Its hard not to compare them to Micks and John Gs engines which I know it not a good thing to do. They are in a different league to my modelling abilities and their modelling never ceases to impress me. Its good to have something to aspire to though, and hopefully one-day my modelling will be held in just as much high regard as theirs.

Sunday was spent the the N Gauge show (TINGS) where once again I spent an enjoyable day mingling with other members of the public talking to people and marvelling at all the nice bits and bobs on display. The highlights for me at the show were the following..
The last thing that I feel is worth mentioning is the 3D printed bits from DJM. To me, the display and representations of future models was shockingly bad. So much so that even the guy on the stand seemed embarrassed about them when I spoke to him. NOT a good advert for someone who is trying to gain a foothold into the market and the total opposite to all the hype I have heard about.

Overall I had a brilliant weekend and from what I have heard, it sounds like I made the right choices of what to go to as well.

Posted by Julias Modelopolis at 23:14

Julias Modelopolis
This is my Blog where I can document my main hobby. I work in the scale of 2mm:1foot and am a member of the 2mm Scale Association. This is where I can post my ideas, thoughts, and progress on my modelling including my current layout Highclere.